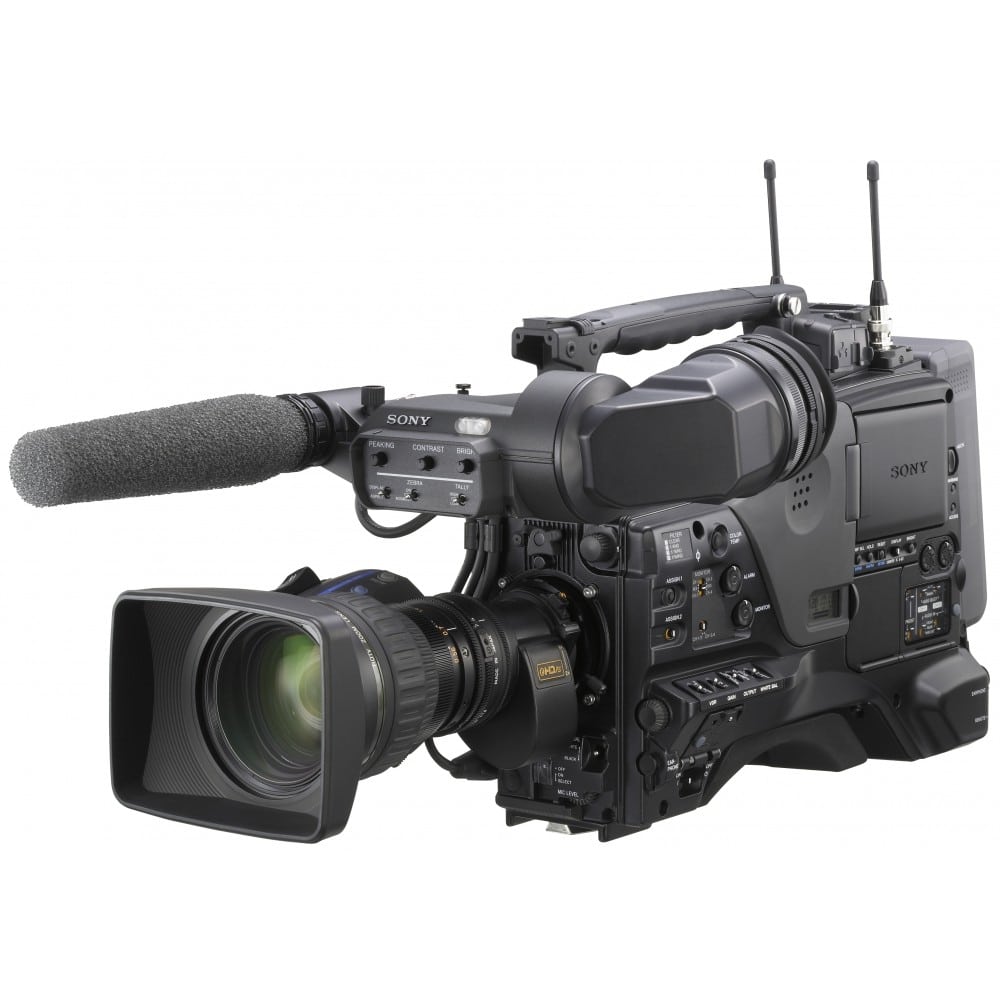 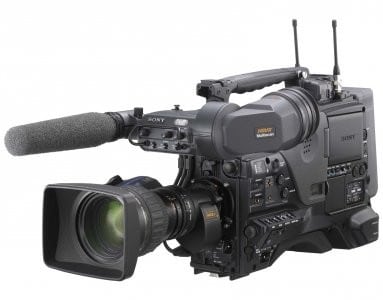 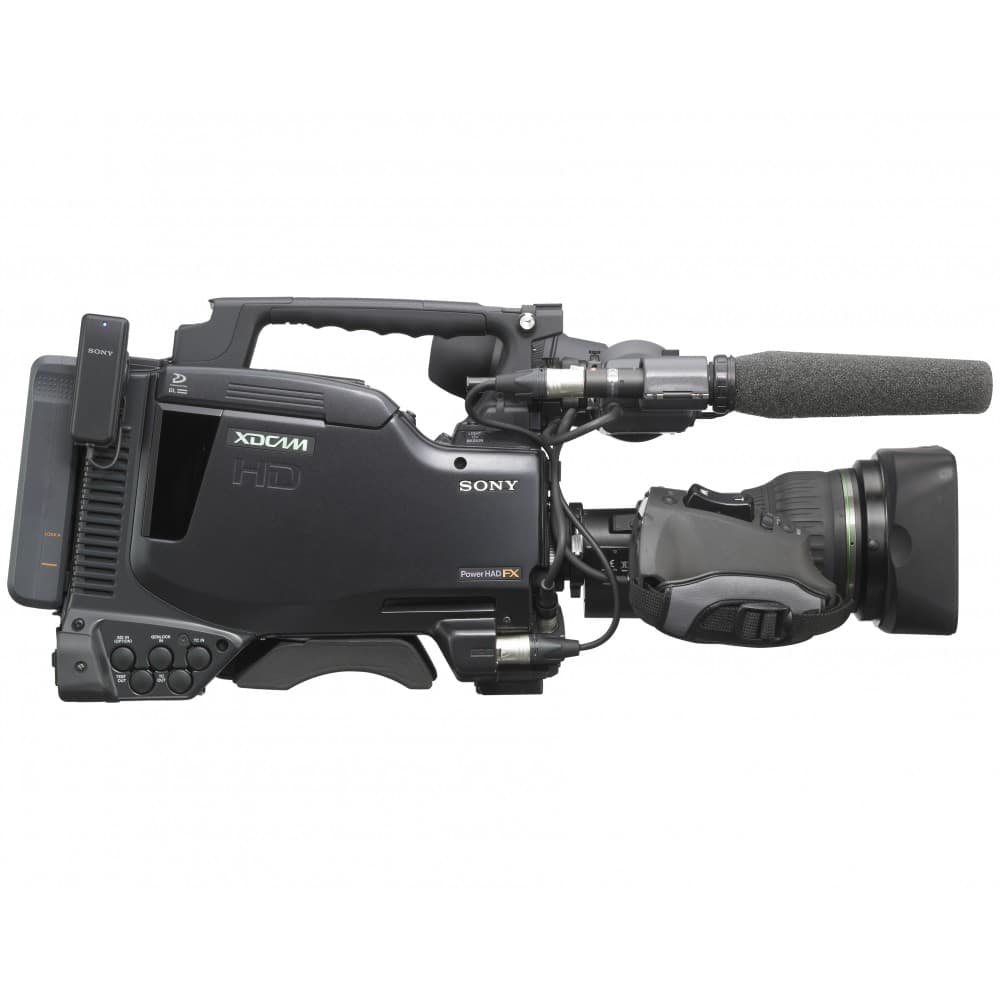 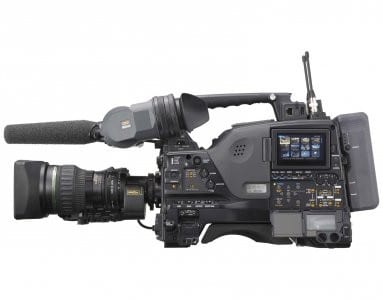 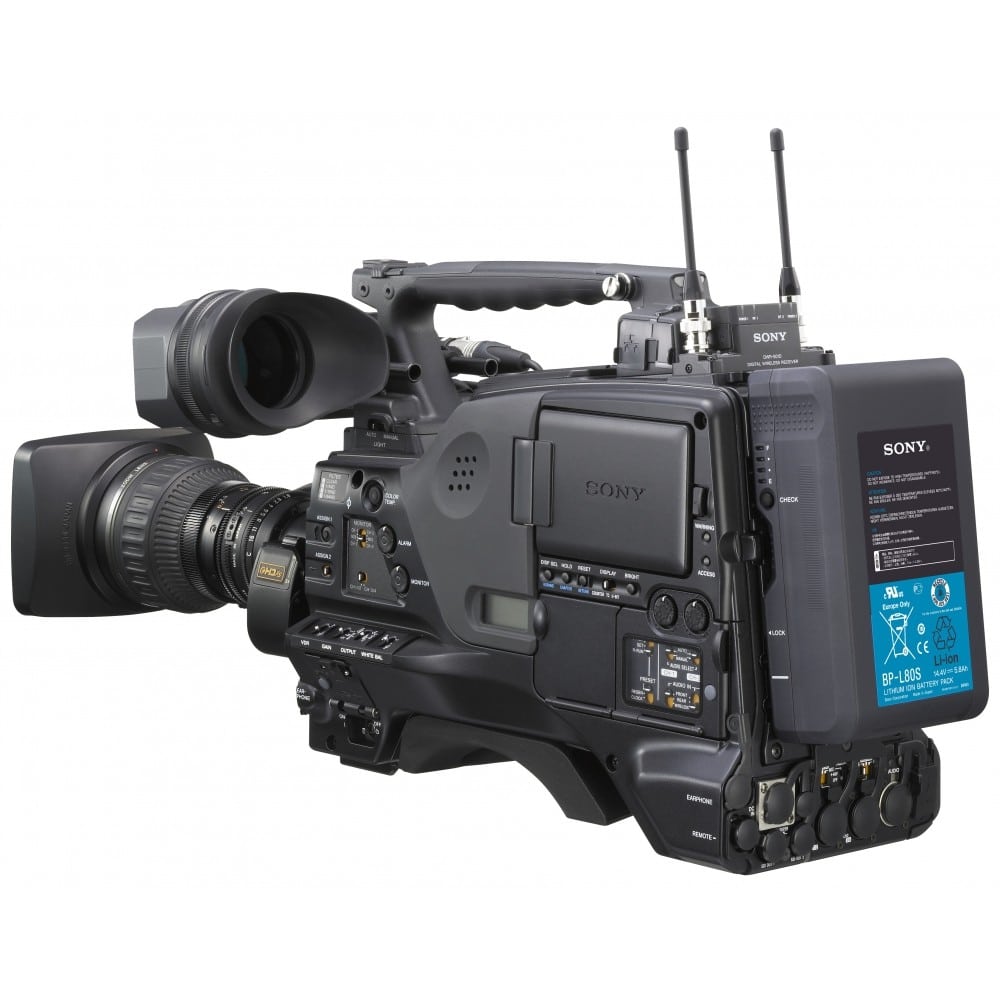 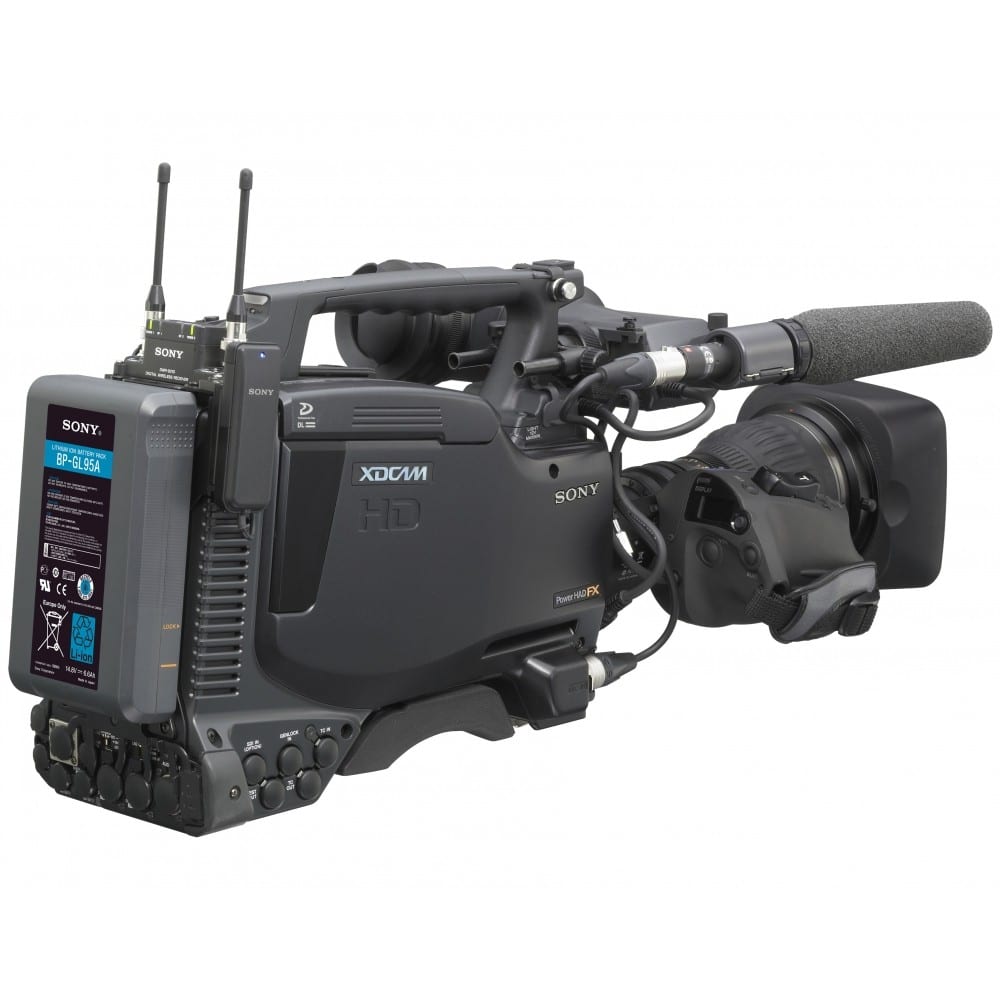 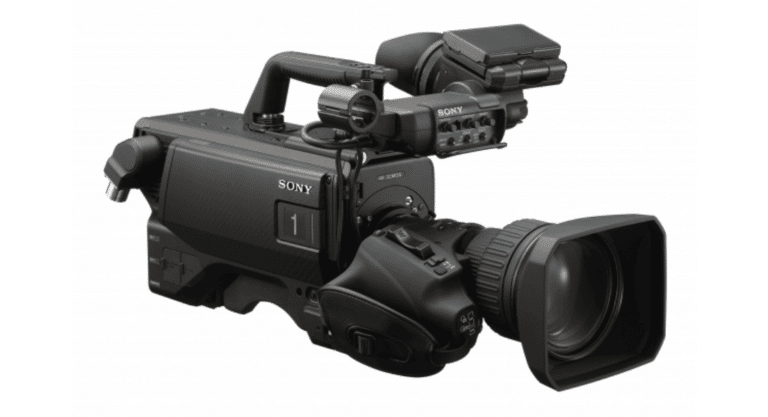 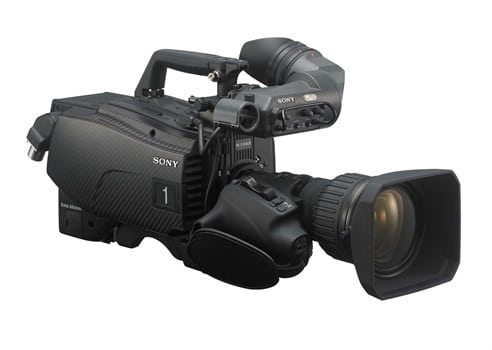 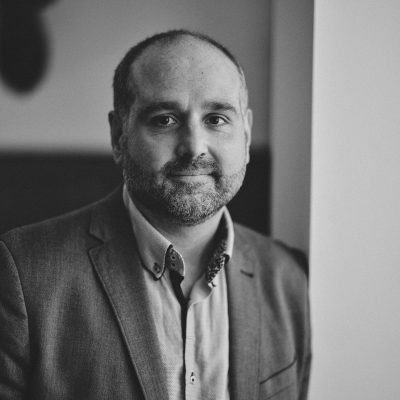 The PDW-700 is equipped with three 2/3-inch-type 2.2-megapixel full HD progressive CCDs, which are also used in the well-proven HDC-1500 HD Camera from Sony. Based on Sony’s Power HAD FX sensor technology and the latest on-chip lens structure, this type of CCD offers a high sensitivity of F11 at 59.94 Hz (F12 at 50 Hz) and an excellent signal-to-noise ratio of 59 dB in Noise Suppression (NS) mode, which helps to reduce the high-frequency noise elements of video signals using Sony’s advanced digital processing technology.

One of the big appeals of the PDW-700 is its highly flexible multi-format recording capability. Users can select a recording format from HD (MPEG HD422 and MPEG HD) and SD (MPEG IMX* and DVCAM*), in a variety of frame frequencies (as shown in the table on page 4).

The PDW-700 incorporates a high-performance 14-bit A/D converter that enables images captured by the high-performance CCDs to be processed with maximum precision. In particular, this high-resolution A/D conversion allows the gradation in mid-to-dark-tone areas of the picture to be faithfully reproduced. Thanks to the 14-bit A/D converter, pre-knee signal compression in highlighted areas can be eliminated, and the camera can clearly reproduce a high-luminance subject at a 600% dynamic range.

The PDW-700 records uncompressed four-channel, 24-bit audio. It is also equipped with a range of audio interfaces.

The PDW-700 is designed to be very compact and ergonomically well balanced, providing a high level of mobility and comfort in various shooting situations. It weighs only 6.0 kg (13 lb 4 oz) including the HDVF-20A viewfinder, the ECM-680S microphone, the PFD50DLA disc and the BP-GL95 battery pack.

To minimise errors caused by shock or dust entering the disc drive, the PDW-700 has several unique ways of providing operational resistance to such factors. The disc drive entrance is concealed by two lids, helping to prevent any dust from entering the drive. In addition, four rubber dampers are used to hold the disc drive block in place and to absorb shocks that would otherwise go into the disc drive.

Two types of optional viewfinders are available for users: the HDVF-20A and HDVF-200 2.0-inch** monochrome viewfinders and the HDVF-C35W 3.5-inch** colour viewfinder.

The PDW-700 is compatible with a variety of microphones. Three shotgun-type microphones, ECM-680S/678/674, are available as options. Moreover, it is equipped with a slot to accommodate the DWR-S01D** digital wireless microphone receiver, which provides two-channel audio with stable and secure transmission tolerant to interference waves. The WRR-855 Series microphone receiver can also be used within this slot.

A large, easy-to-view, colour LCD screen on the PDW-700 camcorder’s side panel enables operators to instantly review recorded footage, as well as access the camera’s set-up menus and view status indications such as four-channel audio meters, and the remaining time available on the disc and battery. It also enables advanced operations such as Thumbnail Search and Scene Selection.

The shutter speed of the PDW-700 is selectable down to a 16-frame period (in 2-, 3-, 4-, 5-, 6-, 7-, 8- and 16-frame periods). During such a long frame period, electrical charges accumulate on the CCDs which dramatically increase sensitivity. This helps camera operators to shoot in extremely dark environments. The Slow Shutter function also allows operators to use shutter speeds longer than the frame rate, and to intentionally blur images when shooting a moving object, for increased shooting creativity.

The PDW-700 offers an Interval Recording function which intermittently records signals at pre-determined intervals. This is convenient for shooting over long periods of time, and also when creating pictures with special effects of extremely quick motion.

The PDW-700 offers a Picture Cache Recording function that is especially useful during ENG applications. Up to 30 seconds of audio and video signals are buffered into the camcorder’s memory before the Rec start button is even pressed (when in Standby mode). This means that everything that happened 30 seconds before the Rec start button was pressed will still be recorded onto the disc.

What’s more, this function works even before the disc is inserted in the drive – thereby helping to prevent the loss of any unexpected, yet important events. The caching period can be adjusted by menu setting. This camcorder cache memory also allows users to exchange the discs while recording. By removing a disc from the drive and inserting a new disc within 30 seconds, video, audio, and time code can be recorded seamlessly onto the new disc.

The PDW-700 camcorder has a Live

The PDW-700 with the HDCA-702* MPEG TS Adaptor provides a MPEG Transport Stream output capability via a DVB-ASI connector. The HDCA-702 encodes signals to MPEG TS and output via its DVB-ASI connector, concurrently with the PDW-700 recording onto disc. The bit rate is selectable from 17.5 Mb/s to 43 Mb/s, which is suitable for material transmissions using microwave and satellite modulators.

*Planned to be available in summer 2008

A wide choice of gain and its easy-to-use control system is one remarkable feature of the PDW-700 camcorder. By setting the gain to the assignable switches, the user can easily access the desired gain. And the transition to each gain value is extremely smooth thus eliminating undesirable abrupt changes to the overall image.

The PDW-700 camcorder comes equipped with optical ND (Neutral Density) filters and electrical CC (Colour Correction) filters. The optical ND filter is controlled via a built-in ND filter wheel — Clear, 1/4ND, 1/16ND/, and 1/64ND. And with the electrical CC filter, the user can easily obtain the desired colour temperature by setting the mode – 3200K/4300K/5600K/6300K – on a camcorder-assignable switch.

The user can select the four values cyclically or choose one preset value. Another usage of the CC filter function is the colour temperature setting which can be instantly set to the required level with an absolute value 3200K, 4300K, 5600K, or 6300K. This is also available via an assignable switch. This is useful when a sudden change happens in the shooting environment and a quick and direct setting is required.

*Use of the Digital Extender function reduces image resolution by half. Requires a software upgrade planned to be available in autumn 2008

At the touch of a button, the center of the screen on the viewfinder of the PDW-700 camcorder can be magnified to about twice the size, making it easier to confirm focus settings during manual focusing.

*Requires a software upgrade planned to be available in autumn 2008

*Planned to be available in autumn 2008

The PDW-700 camcorder has the Trigger REC function that enables synchronised recording with PDW-HD1500 and PDW-F75 XDCAM decks or HDCAM™ portable decks connected via the HD-SDI interface – a convenient feature for backup recording.

Wow and Flutter Below measurable limit