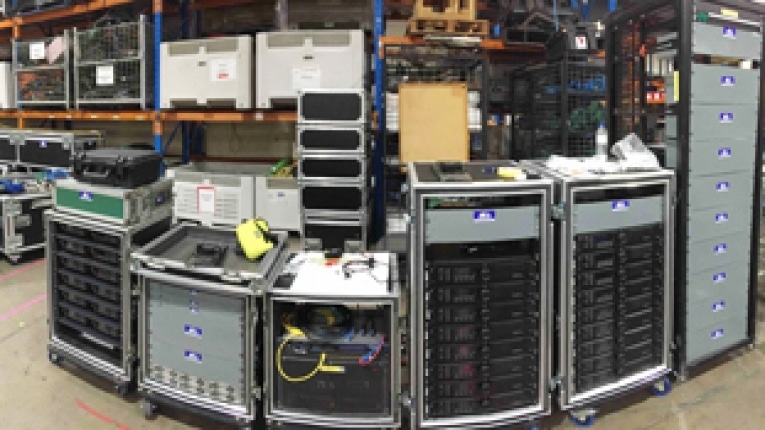 As Manager of Event Communications Jason Owen explained, “Since we launched just six months ago we have added new staff and our inventory has grown by over 250%. The main reason for both these statistics lies in the success we have already enjoyed in providing communications for the Australian Open Tennis – a 5 week 24/7 operation which included the setup and tournament, the NSW and Victorian Departments of Education for their annual spectaculars, Hillsong Church Melbourne for their Christmas Carols show and for the Endemol Shine Group for Spelling Bee, Shark Tank and Master Chef. We have also provided a large repeater network for the October Taylor Swift concert in Sydney where we also took care of all the broadcast services.  We also supplied the Spring Carnival’s broadcast communications across the entire two and a half weeks it ran.”

Owen sees Gearhouse’s mix of the latest technology underpinned by his team’s significant comms experience as the keys to the company’s rapid growth adding, “We are finding that the ClearCom FreeSpeak II and HelixNet products are performing extremely well for our clients.  Our Hytera inventory has grown three-fold in the last six months and we now stock the largest Hytera rental fleet in Australia. We also stock a large inventory of Wizycom radio mic and IFB systems giving us a key point of difference in the market where comms and audio often conflate.”

Alongside the Australian Open Tennis which was in itself a large Hytera and Riedel installation, 2016 saw Gearhouse also provide a new wide-area comms solution, Radio Mic and IFB systems for Network Ten’s I’m a Celebrity Get me Outta Here (IAC) using Hytera’s IP multi-site facility.

Owen continued, “By using Hytera’s DMR IP multi-site functionality we can provide a wide area comms solution for any type of event including large single site, a series of interconnected sites or remote interstate or international sites. With shows like IAC that are shot in remote locations, radio coverage can be a challenge when dealing with difficult terrain, wet weather, and large geographical areas. Reliable radio coverage is a must for production workflow and crew safety.  With almost any type of IP connectivity, we can connect UHF coverage areas with ease.”  For shows that operate remotely from their HQ, Gearhouse can provide a cost affective alternative to long distance phone calls, by installing an IP repeater at both ends.

For IAC’s radio mic and IFB solution Gearhouse utilised its Wizycom system which enabled multiple receive and transmit locations to be connected via fibre over the diverse terrain IAC operates in. Owen added, “We spent 2015 refining the Wizycom solution for all the V8 Supercars races and now we are able include it in our offering which now includes wireless, and wired multi-site communications and fibre enabled multi-site radio mic and IFB systems.”

The Hytera units also come with GPS enabling Gearhouse to GEO-TAG a user’s location for improved safety and to help prevent the loss of units.

It’s not just the greenery of the jungle which has called for Gearhouse’s event comms solution as the company has also won the contract to supply the newly rescheduled Tropfest short film festival in the gardens of Centennial Park, Sydney.

Jason Owen concluded, “For Tropfest we are installing two repeater sites linked via Ubiquiti IP links. Once connected the system will deliver park-wide coverage for eight channels. Each job is different but the requirements and our deliverables are the same – efficient crystal clear reliable comms across the event whether it’s a broadcast TV production, live music show, corporate function or government agency.”