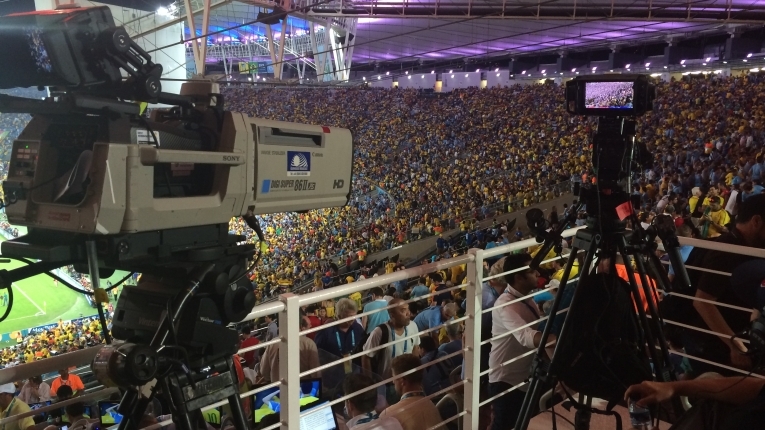 Two thousand and Phoar-teen, What a year.

2014 has been a year of firsts, a year of innovation and a year of major live events.

This has been a very exciting year to be working in the broadcast industry and Gearhouse has been hugely busy providing specialist services to broadcasters, production companies and event producers worldwide.

Gearhouse has worked across a multitude of projects this year, including the World Cup in Brazil. Here Gearhouse provided project solutions, equipment and technical support to various broadcasters including ITV in the UK, Torneos y Competancias in Argentina and ESPN in the US. We also built and installed the ten technical operation centres for HBS and supplied them all with technical engineers for the duration of the tournament.

Grand Slam Tennis was served up as we provided facilities to the Australian Open, French Open and Wimbledon tournaments as well as the ATP Tour for a variety of content owners and broadcasters including IMG, Fox Sports Australia, Channel 7, WOWOW and Live @ Wimbledon.

Sports weren’t the only live events which Gearhouse was involved in throughout 2014. We’ve just finished a run of providing the audio broadcast facilities for ITV prime time hit The X-Factor and we haven’t long returned from the jungle where we delivered robust technical and production facilities for ITV’s I’m A Celebrity, Get Me Out Of Here!. For this, HD flyaway solutions were installed in the Australian jungle alongside a brand new production facility for the 2014 series which split the production facilities of the live and reality sections of the show for the first time.

Gearhouse Broadcast also provided a complete switching centre for the broadcast of the NATO Summit Wales 2014, the largest gathering of international leaders ever to take place in Britain.

Business wise, we expanded our offering with the acquisition of French RF specialists ACTIS HF. The company has remained in their Paris base and taken the name Gearhouse Actis. We used Gearhouse Actis to provide the RF cameras at the Asian Games in Incheon, South Korea. The Gearhouse Actis team were able to develop a solution prior to the Games so that the Hitachi SK-HD1200 production camera could be used wirelessly – something we’ve not done previously.

The acquisition has been hugely beneficial for both parties – Gearhouse has been able to expand our offering of RF technology and Gearhouse Actis is able to provide their services to a wider range of clients.

IBC2014 was a huge event for Gearhouse. Here we showcased the updated OBLite, our game changing fully-equipped, live production HD trailer. Now based on Ross Video’s openTruck blueprint, OBLite is capable of housing a seven- to eight-person production and operation crew. This initiative ensures increased efficiency, video quality, and the ability to quickly reconfigure the trailer for different events.

We also announced OBPod, our new lightweight expandable flyaway production solution. OBPod is built on the concept of our flyaway pod which has been successfully used by Sky Sports for its coverage of the past three Formula 1 seasons. We selected every component, fixture and material for the new solution with weight in mind so that we could make the solution lighter, easier and cheaper to ship and quicker to rig.

At the show, we agreed to purchase the first 50 of Hitachi’s newly announced SK-UHD4000 4K camera systems. This was a huge investment for us and future-proofs our camera stock for when demand arises for 4K broadcasts. The SK-UHD4000 fits perfectly into current HD workflows – it works in just the same way as previous models but is able to capture a 4K feed at the same time. We tested the system at the ATP World Tour Finals in The O2 where we used them for the standard four-camera HD broadcast.

We’ve just completed the build of our new 4K native OB Supertruck. HD8 is to be used by our Australian business and includes 12 Hitachi SK-UHD4000s. The supertruck is ideal for both large-scale entertainment and sports and can facilitate a simulcast production outputting a 4K cut and a HD cut at the same time. It’s perfectly aligned to work in any upcoming HD productions and can easily make the switch to 4K when demand arises.

From everyone here at Gearhouse to all our clients, partners and friends – happy holidays and a happy new year to you all.