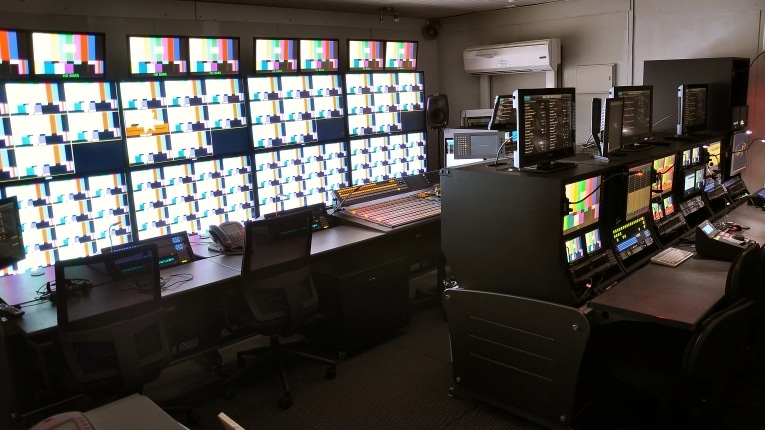 The Australian Open is one of the largest and most complex annual events that Gearhouse Broadcast covers. Drawing on previous ATP Tennis Masters Series experience, the Gearhouse Broadcast technical set-up has been expanded to accommodate the size and magnitude of the event.

This year the tournament was bigger than ever before with Gearhouse Broadcast providing Channel 7 with a comprehensive package of technical facilities and crewing across the entire event. The Broadcast Centre was built into a large double story temporary building that housed all the technical facilities including the Production Control, Audio Control, Logging & Archiving, Edit suites and production offices.

Gearhouse’s Engineers installed all the technical host facilities within ten days then fully tested them before handing them over to Channel 7 for their coverage of the event. During the event support was provided by audio, video and communications engineers who worked in shifts to ensure that the facility ran smoothly.

Broadcast equipment supplied for the championship included 57 x EVS XT 3s, 50 x IP Directors with a range of EVS XFile and X Store units and these systems where linked into Avid ISIS servers and edit suites. A range of vision desks were supplied to cover the courts and uni-laterals including the Kahuna 4ME, Kayak 2.5ME, MFS 2000 1.5ME, Sony MVS 8400 4ME, Sony MVS 7000 4ME and Kayenne 4ME. All the cameras used at the tournament were Sony with a total of 65 x HDC1500’s and 6 x HDC 3300 Super Motion’s with a wide variety of Canon XJ and HJ type lenses.

Gearhouse Broadcast where also awarded a multi-year contract for an international broadcaster for their coverage of the Australian Open. The contract was to provide uni-lateral facilities consisting of two large production and audio control rooms, an MCR area with an EVS system for Ingest and on air playback that integrated with an Avid ISIS and Nitris Edit suites. They also provided the production facilities for Tennis Australia which was an MCR, Ingest, playout and Editing facility that provided the feeds for the various broadcast platforms to which Tennis Australia were delivering content.

The Hi-Motion II™ camera is able to shoot at up to 1,000 frames per second at 1080p using three CMOS sensors and provides simultaneous output of live real time video and ultra slow motion replay video.

According to Gearhouse Broadcast’s Chief Operating Officer, Kevin Moorhouse “Being appointed to deliver broadcast solutions for the Australian Open is testament to the confidence Channel 7 and other international broadcasts have in Gearhouse Broadcast based on track record of working on projects of this size and complexity”

“The event has its challenges both in terms of logistics and technology, but having delivered the broadcast facilities for the Australian Open for the past eight years we have an in-depth understanding of the project”.

The event ended with a Nadal v Djokovic showdown in the final, which saw the World’s No.1 Djokovic capture his third Australian Open crown by defeating Nadal 5-7 6-4 6-2 6-7 7-5.