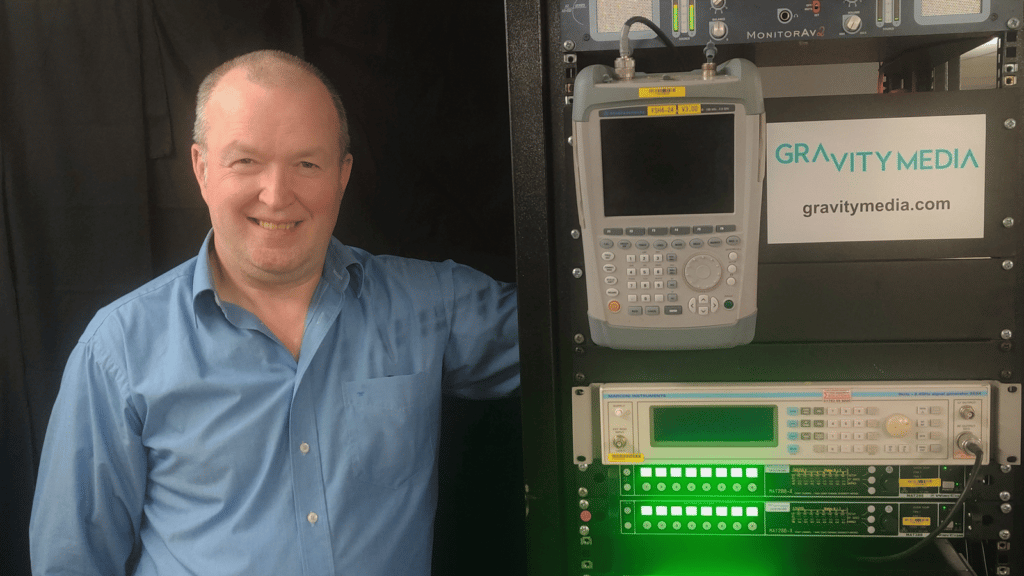 Colin Pearson, Gravity Media’s Senior Sound Engineer in the UK, tells us about the role of the radio microphones used in modern TV productions, commercials, movies and more.

“The two key components of any TV broadcast are vision and audio. There’s always a great deal of fanfare around the latest UHD cameras and lenses, which do play a pivotal role in bringing moving images to life, but perhaps not enough is said – or understood – about the art of delivering the audio element without which every production would be lost.

Audio technology has advanced to the point where basic radio mic use is well within the capabilities of amateur dramatic societies and even school nativity plays. That ease of use covers an awful lot of professional studio applications, too, when the environment is tightly controlled – that is, when the speaker is standing in a nice air-conditioned studio, just a few metres from the receiver. So far, so good.

The fun starts, however, when creative staff decide that they want to make programmes a bit less ordinary, and want to push the boundaries. That’s when experience, and no small amount of advanced technology, can help them realise (most of) their visions.

The problems can come either from the geography involved, or the quantities of radio mics required – trying to cope with the physics of 100 competing radio frequencies is considerably more daunting than coping with two. This is especially true now, as the RF spectrum is increasingly given over to the insatiable demands of the mobile phone industry. Thankfully, Gravity Media’s extensive range of Sennheiser 6000 and 9000 Series digital radio mics allow for a much greater density of channels than has historically been possible, and it’s these units we use, for example, on The X-Factor and Britain’s Got Talent (BGT) – massive productions that can demand some 70 to 80 channels.

As for geography, perhaps the producer wants the talent to arrive via the car park, on the back of a Harley, singing the show’s theme tune, played by a band inside the studio. Or perhaps it would be great if the presenter could run in and out of the guests’ dressing rooms, some of which are underground, accessible via an enclosed concrete stairwell… Sounds implausible, but that’s just what we had to do on BGT not so long ago.

We’re often called upon to provide multi-zone coverage, to capture the talent on, and off, the stage. For short distances, we can do this using multiple antennas and coaxial cables, mixed together with our Wisycom MAT288 combiners, but, as distances increase, we must often deploy programmable LFA remote antennas over low-reflection optical fibre, using Wisycom’s MFL range of RF-over-fibre links. This means we can handle anything, from 50 metres to a few kilometres, and is precisely what’s needed by the roving reporters at the US Open tennis – the technical coverage of which won our client ESPN a Sports Emmy in 2018.

Maintaining continuous audio from the presenter’s radio mic is obviously essential, but just as important, if not more so, is keeping their talkback from the producer going – wherever they are. Every presenter I’ve worked with wants to know what’s going on – all the time – so seamless, reliable IEM coverage is compulsory.

This is one of Gravity Media’s sweet spots: engineering solutions, using Wisycom MTK952 transmitters, MPA slave amplifiers and some of our own custom kit, to enable presenters to move through different zones without experiencing any dropouts or ‘mush’ on their IEM feeds. It’s not cheap technology, and it takes a degree of care to set it up appropriately, but it’s the only way to provide the high-quality, low-latency IEM feeds that many modern productions require. We’ve used this technology on I’m A Celebrity…Get Me Out Of Here! and Formula 1 – both of which are the benchmark productions for their genre.

We’re proud of our record in delivering flawless audio performance from the most complex of broadcasts, and we’ve always positioned ourselves ahead of the curve when it comes to offering the latest wireless audio workflows. Quality sound rightly sits alongside quality visual when it comes to the best productions, and we’ll continue to ensure that happens on everything we work on.”