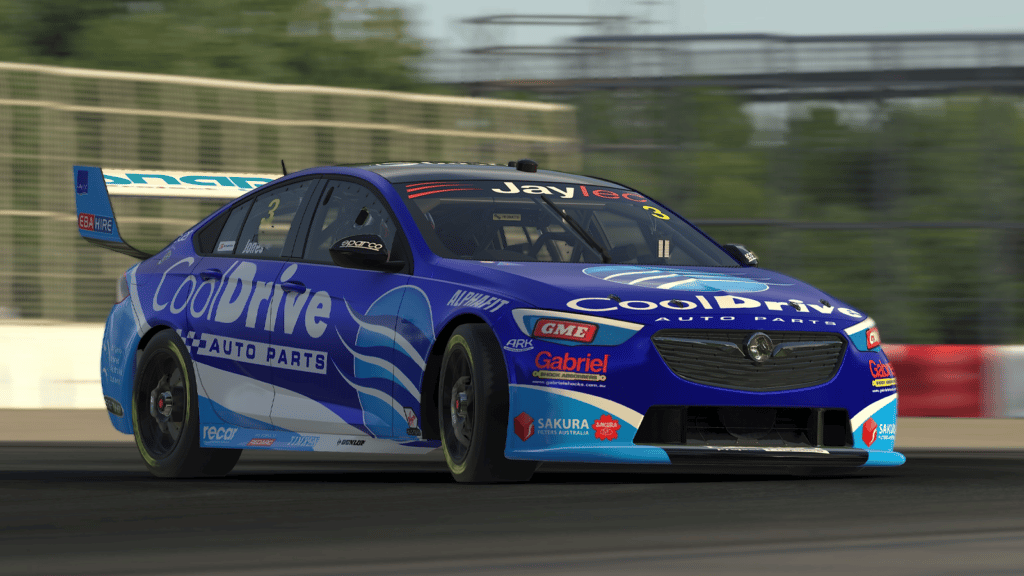 Gravity Media Facilitates The 10-Round Bp Supercars All Stars Eseries

From 1995 to 2012 it was solely the domain of the legendary Holden vs Ford battle. A milestone 2013 was the first year of the Car of the Future (COTF) platform. These cars are lighter, more economical, have increased agility and are more competitive than their predecessors, and create better racing.

In March 2020 Supercars announced that it had decided to postpone its next three events in response to the COVID-19 pandemic, filling the gap with a new Eseries competition, featuring real-life Supercars drivers. Using the iRacing platform featured in last year’s Supercars Eseries, teams will race their own virtual Supercars in their team colours, online from home, on a weekly basis. Supercars aims to run the Tasmania, Auckland and Perth rounds later in the season, as well as a replacement event for the Melbourne 400.

On 31 March 2020, Supercars announced that official fuel supplier BP had signed on as the title sponsor of the All Stars Eseries, with the 10-round championship renamed the BP Supercars All Stars Eseries. All 25 Virgin Australia Supercars Championship drivers agreed to take part via the iRacing platform, driving virtual Ford Mustangs and Holden ZB Commodores with their own individual livery and race number.  There have also been a number of guest driver appearances including Max Verstappen from Formula 1 in Round 2, Will Power from IndyCar in Round 3 and Joey Logano from NASCAR in Round 4. The Supercars drivers have also been guests in other series, including Scott McLaughlin from Team Penske in the Indycar iRacing Challenge.

The BP Supercars All Stars Eseries features a wide range of internationally renowned circuits. A total of 18 different tracks are planned to be used across the season’s 10 rounds, with Bathurst’s Mount Panorama the only destination set for two visits.

The BP Supercars All Stars Eseries is broadcast on Fox Sports, Kayo, TEN Play and Sky Sports New Zealand, as well as streamed on Supercars’ Facebook and Twitch channels. Other streams Gravity Media is feeding include Fox Asia, motorsport.com and Red Bull TV in territories as far flung as Eastern Europe, Scandinavia and Africa.

The first round on 8 April featured iconic race tracks Phillip Island in southern Victoria and Monza in northern Italy. Over 158,000 people tuned in to watch some or all of the live broadcast on Fox Sports 506. An average audience of 70,000 people watched the newly launched series, peaking at 103,000 people over the course of the two hour live show, making it the fifth-most watched show on Subscription TV and the only Fox Sports product in the top-20 shows. The live broadcast numbers were bolstered by online platforms, where 210,736 viewers tuned in to the live free online broadcast from around the world. From there, the Eseries headed the UK’s historic Silverstone and Spain’s Barcelona F1 circuits for round two on 15 April.

Round three of the Eseries on 22 April was on more familiar ground at Bathurst’s Mount Panorama circuit. An average of 76,000 viewers tuned in to the live coverage on Fox Sports 506, peaking at 108,000 over the course of the two-hour event. This was bolstered by online platforms, with Supercars teams and drivers hosting their own streams to fans around the world, and around 100,000 people watching the live stream through the Supercars Facebook page. The 10 Bold replay each Saturday has attracted around 130,000 viewers after Rounds 1 and 2.

Overall, the 10-round virtual championship will head to four continents and nine countries and will include venues used by Formula 1, IndyCar, NASCAR and more in what shapes as an intriguing challenge for drivers. Also included will be American speedway circuits at Daytona and Alabama, with historic Formula 1 layouts Imola and Interlagos joining the likes of Silverstone, Montreal, Spa and the Nürburgring from earlier on the calendar. Legendary Australian circuits are not forgotten about, with Oran Park and Mount Panorama to form a spectacular finale. Oran Park will bring back memories for fans who adored the NSW circuit until its final Supercars event in 2008, when it made way for residential development.

All this has been made possible through a close working partnership between Supercars and Gravity Media’s Australian operation. These have been very successful and technically challenging events, which Supercars and their TV production team lead by Nathan Prendergast have thrown all their effort at since the COVID-19 outbreak.

Gravity Media is the Outside Broadcast Technology partner to Supercars, swapping out the production trucks for its broadcast studio facility at The Production Centre in Sydney with host set as well as a full control room for the production. Commentary is shared between Gravity Media’s Production Centres in both Sydney and Melbourne, with race control and adjudication on the Gold Coast. All 25-driver webcams around Australia were available via Zoom conference, and two scan converted outputs with driver audio available on Discord channels. A great remote production and technical turn-key solution.

Gravity Media provides unique methods to integrate up to 30 drivers from all over the world, commentators in Melbourne and Supercars judiciary in Gold Coast, as well as the control room and studio elements at The Production Centre in Sydney for the action to be streamed live across multiple platforms.

This Eseries, featuring Championship drivers, is a great opportunity for Supercars fans to still connect with drivers and teams, whilst still following the social distancing measures that have been put in place to keep us all safe.

The Eseries is broadcast across a two-hour weekly window from 19:00hrs Sydney time on Wednesday nights.

In support of the Eseries, Gravity Media’s Production Centre in Sydney utilizes on site studio hosting, cameras, EVS replay, multiple iRacing observer PC’s, commentary, as well as all talent green rooms and control room. The Production Centre in Sydney also integrates cameras and communications with each of the 30 drivers in locations as far-flung as The Netherlands and the USA.

NB: The Gravity Media’s Production Centre in Sydney and other sites practices the appropriate COVID-19 safe work precautions with hand sanitiser and glove stations, temperature testing as well as safe-distancing in all work spaces including control rooms and studios.

Fans will also have the chance to test themselves against Supercars’ elite brigade of drivers as a bonus element to the BP Supercars All Stars Eseries. Fixed set-ups will be implemented throughout the online championship, with Dunlop Super2 Series leader and simulator racing expert Brodie Kostecki tasked with locking in settings for all cars to run at each designated track. The idea behind that is to ensure close racing, preventing drivers with more simulator experience to get a jumpstart on their less familiar rivals.

The spin-off effect is that Supercars will make the set-ups – catered to each circuit – available to all fans to try. While trying to outpace drivers in real-life is stunted by factors including time and cost, fans can have unlimited attempts with the exact same car set-up to see if they can match the stars of the sport in the online sphere.

Fans are encouraged to record their attempts and upload them to the relevant posts on Supercars’ Facebook page.