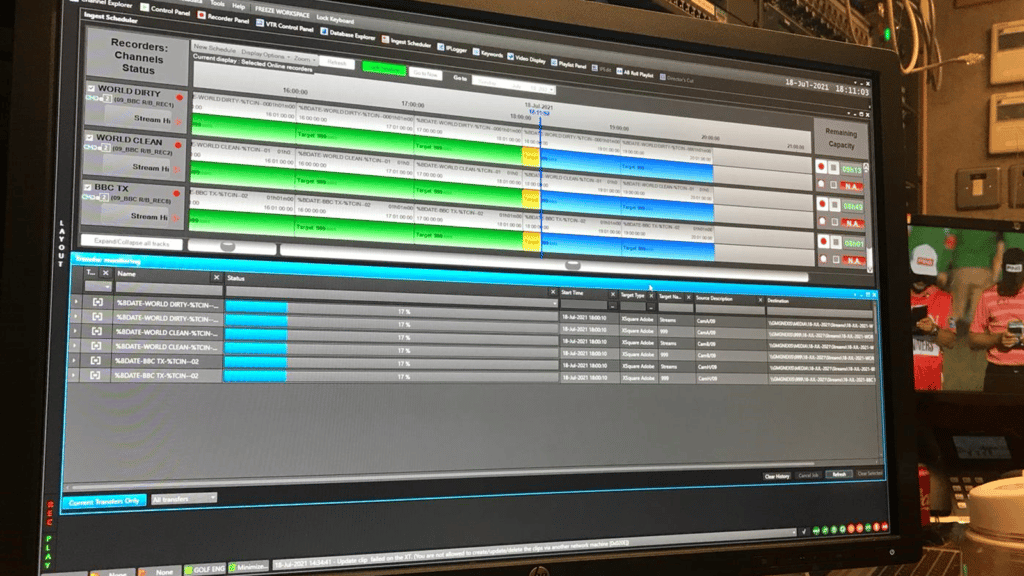 One of my recent projects was The Open Championship ‒ the world’s oldest golfing tournament ‒ which is held every year in the UK in mid-July. Sky Sports covers the event, and dedicates its Golf channel to the tournament for over a week. Before the tournament begins, Sky Sports produces a contextualised, magazine-style programme based around the action on the golf course, for which Gravity Media provides the hardware and software, and Sky provides the edit team.

My role in 2021 was to create an onsite editing facility, as Sky has multiple unilateral interviews, short VTs and ENG cameras supplying footage to be swiftly edited together, every day. The host feed, or world feed, is put out on Sky Sports, as it is all the other golf channels, and Sky complement this with their own additional unilateral coverage for their subscribers, including shooting ENG footage for edit packages and a preview show centred on the Sky Open Zone interview and demonstration area.

Before we get anywhere near the golf course, we start by setting up and testing the hardware and software back at our Southwood base, checking licences and all current software compatibilities, testing the full workflow from end to end under stress, making sure all the network devices can see each other, and running basic tests. Once we have confidence in it, we replicate that set up onsite, and integrate that suite with the extended EVS system, which, for this particular event, is usually provided by another outside broadcast company. Both the OB company and Sky provide me with all necessary information while I’m planning the setup, so expectations on every side are aligned ‒ how heavily the system will be used, whether they need any special effects, what plug-ins they need, and what sort of cards they’re shooting on with their cameras. Ahead of the tournament starting, we run full tests, check the audio configuration on the available media, and make any necessary workflow adjustments.

Behind all this is an Adobe Premiere suite, used by an editor and a team of producers, who ingest footage shot on the ENG cameras to make new daily packages. Media from the host broadcaster is also available during the tournament to complement any footage shot on ENG. Footage can be edited seamlessly, as it is saved on the EVS system and is available in Adobe, and can also be sent back swiftly to the EVS system for playout.

Sky Sports produces four days of two-hour shows before the event begins, as well as full coverage of the four-day tournament itself. Much of the preshow is footage shot on the ENGs in the local area. During the live event, it runs from 6:30am until 7pm daily. This is where the EVS integrates with the Adobe edit system: the host feed will be streamed, interspersed with little highlights packages, interviews and similar VTs.

For media management, an overview of the recordings and storage, we supply an EVS IPDirector unit. XTAccess is used for moving media around the system and transcoding to and from other formats, and an XT3 server for record and playout. This will record various cameras and feeds and playout to the Sky Sports Golf ‘Open Zone’ touchscreen during interviews and demos. This server also plays directly back to Sky Sports at Osterley, where the main programme is produced, for use in any Sky broadcasts during the event. The Open Zone interactive touchscreen is a Sky Sports innovation; they use in-house equipment, and we ensure that the team producing the touchscreen systems can see all the media available on our system.

For shared storage, we use a Synology RAID drive, where all the media can be seen by Adobe and EVS, and also by MST – the company that controls the Open Zone system. We use Synology because it can reliably handle the necessary bandwidth and shared access.

The Sky editorial team is six people, as well as the editor, and a couple of camera operators who will be shooting a whole range of footage, from interviews to beauty shots. The onsite EVS facility adds to this system, and this provides the potential to record up to six different channels constantly, throughout the day, and the incoming footage can be clipped up to complement the ENG camera footage. Turnaround is tight; the system is built to ingest cards the moment they are physically handed over, so the footage can be prepared and available for edit and broadcast extremely quickly.

Gravity Media remains onsite during the tournament to ensure the continual integration of our system with those of other facilities providers. We monitor storage and bandwidth and, once the event has ended, remove any media destined for archive from site to client.

I’ve worked on many golf events in the past, and this one is always enjoyable. The trickiest aspect is the weather, as the courses are in very exposed locations. Rigging the interconnected parts of the system is the bit that requires more planning and speed than usual. There are three crucial elements for success: having a system that ingests everything seamlessly; keeping the editor and the production team working independently on that same system; and maintaining and adapting the EVS integration. Once these are all functioning at a consistently high level, you can be confident in the system. The kit doesn’t get turned off during the proceedings, to avoid compromising the synchronicity.

Such large events are always collaborations between production companies; the Open is one of the biggest, so several companies work on it together, and it’s a bonus to see other sides of broadcasting technology. The collective goal is to reach the last night of the project successfully, having delivered flawless coverage all along the way. Once we’ve derigged and got the kit safely back to base, I might have a day or two’s downtime before picking up my next job. It’s pretty full on, but that’s the nature of the job and something we all quite enjoy really.