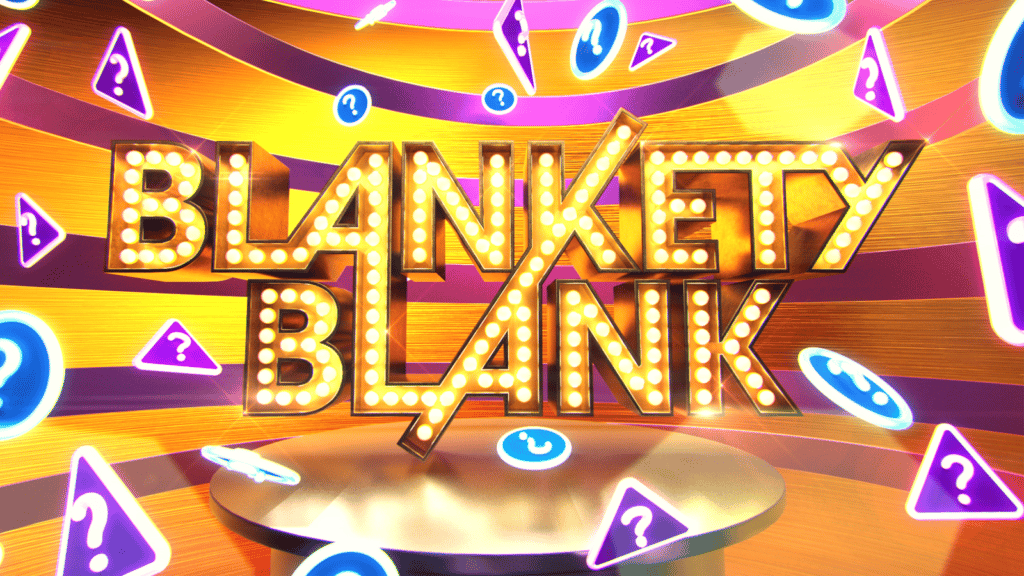 Blankety Blank: Christmas Special features two members of the public, competing to match as many answers from a panel of six celebrities, by filling in the blank to a statement read out by host Bradley Walsh.

The show originally ran from 1979 to 1990 on BBC 1, hosted first by Sir Terry Wogan , then by Les Dawson. Regular members of the celebrity panel included Kenny Everett, Lorraine Chase, Gareth Hunt, Gary Davies, Paul Daniels and Cheryl Baker. A revival hosted by Paul O’Grady (as Lily Savage) was produced by the BBC from 1997 to 1999, followed by ITV from 2001 to 2002 as Lily Savage’s Blankety Blank. David Walliams hosted a one-off Christmas Special for ITV in 2016. The show is based on the 1977–79 Australian game show Blankety Blanks (which was in turn based on the American game show Match Game).

The current filming at Maidstone Studios of course follows all the necessary COVID-19 related social distancing requirements. Installing Perspex screens within their galleries, ensuring the entire site has been taped to show the two-metre distancing rule, providing hand sanitiser and reconfiguring the production offices so that productions aren’t sitting face to face are the main changes they have implemented. Due to their ample facilities they have the flexibility to allow productions to use multiple make up rooms, dressing rooms and production offices.

Maidstone Studios (formerly called TVS Television South) has one of the UK’s largest regional independent television studio and has been home to a vast selection of independent British television programming including Inside No 9 Live, The Split, Catchphrase, Rugby World Cup 2019, ‘Later Live with Jools Holland’ and Jools Holland’s annual Hootenanny.

Gravity Media offers the latest broadcast equipment for rental to the outside broadcast, studio and production markets, supported by a 24/7 technical backup service. All our rental equipment is carefully prepared and tested before every job, and our transportation and logistics team deliver locally, nationally and internationally within days of order.

Each piece of equipment comes with a robust, custom-built flight case ensuring it reaches you in perfect condition and ready for use, wherever you may be in the world.

For more information on our broadcast equipment rental click here or email us enquiries@gravitymedia.com