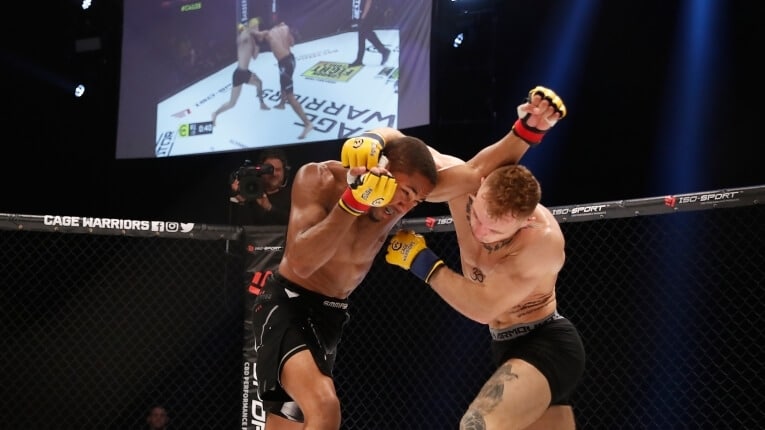 Cage Warriors staged its biggest and most ambitious MMA show in history at the Eventim Apollo on the 29th of June and Input Media Production was right at the heart of the action.

“This is without a doubt the biggest card we’ve ever put together” said Cage Warriors President, Graham Boylan, as Europe’s leading MMA brand’s “Night of Champions” show rolled into the iconic London venue.

The Hammersmith Apollo is of course synonymous with high quality entertainment and the Cage Warriors 106 show didn’t disappoint.  There was a marathon 12 x fight card, which ran from mid-afternoon until 2300, in front of a packed house which electrified the big fight atmosphere.  Fans saw an incredible 6 World Champions crowned during the event in a “fight fest” that sent the Mixed Martial Arts world in to over-drive across digital and social media platforms.

The unforgettable main event was not for the faint-hearted.  An epic to and fro battle for the unified Welterweight title was ultimately ruled a no-contest after the sport’s leading referee Marc Goddard deemed neither Scotland’s Ross Houston nor Denmark’s Nicolas Dalby able to continue to a fourth round.  This was primarily due to the amount of blood loss on the Octagon canvas.  What transpired before that decision is sure to become one of the most talked-about Cage Warrior contests in recent MMA memory.  Both men inflicted and withstood brutal damage, with a much anticipated rematch surely a necessity for fans, perhaps even at UFC Copenhagen?

That was the highlight, but it was safe to say, that the entire fight card offered a thrilling evening of entertainment for fans and TV viewers of this burgeoning combat organisation.  Harry Fitzgerald, Commercial Operations Manager for the Warriors Development Agency, stated:

“Input Media are a superb partner for us and they showed exactly why on our “Night of Champions”.  We had six World title fights, plus many other important prelim fights, featuring the best talent in Europe.  The show Input Media produced looked incredible and they did a fantastic job of making a top class fight card look just that”

Input Media first teamed up with the ambitious Highbury based MMA promotional team back in February 2018.  Several eye catching and highly acclaimed productions from around the UK and Europe have followed, with coverage appearing on BT Sport, UFC Fight Pass and a plethora of international broadcasters around the globe.  However, it is fair to say, the “Night of Champions” took this growing production partnership to a new level in terms of ambition, cooperation, technical requirements and editorial challenges.

Additionally, this epic event also took place at a crucial stage of another hugely important Input Media production and was simultaneously produced during FIFA Women’s World Cup on BBC Television.

Never let it be said that we don’t like a production challenge!