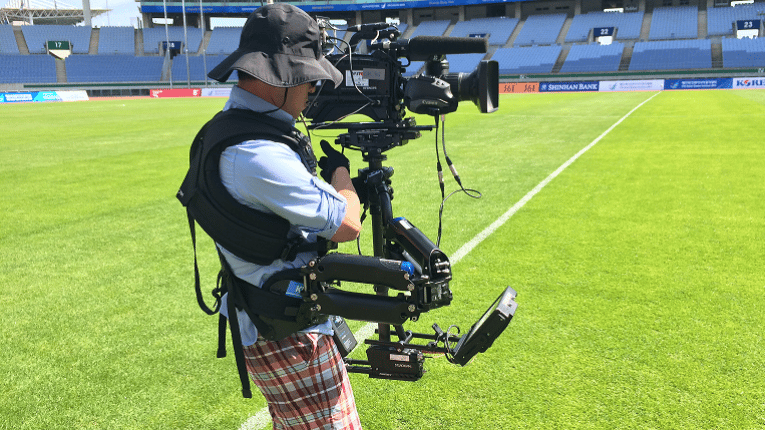 Working with Mito, for Incheon Host Broadcasting Management, Gearhouse provided complete coverage with 65 cameras across five venues hosting a number of sports including athletics, cricket and badminton. It also supplied 31 super slow-mo camera channels and 50 specialist and radio cameras, and sent out a 60-strong team of experts to provide on-site technical support.

This is the first major event that Gearhouse has been able to call on the services of its new in-house specialist RF business, Gearhouse Actis, following its acquisition of the respected French company Actis HF, in July 2014 and subsequent rebranding. Through Gearhouse’s unique partnership with Hitachi, the Gearhouse Actis team were able to develop a solution prior to the Games so that the Hitachi SK-HD1200 production camera could be used wirelessly.

“Having Gearhouse Actis on board is a huge help to us both during the build-up to the Asian Games, and while on-site in Incheon,” said Edward Tischler, head of projects at Gearhouse Broadcast. “It proved a valuable resource for my projects team, and our customers at major events in the future. With their expertise on hand, we can now be much more flexible in meeting the usual RF challenges we face at events like this like the inevitable frequency changes.”

Sang Ho Park, president of Mito Corpotation said, “Gearhouse has a proven track record of performing at the biggest events, and has been able to deliver various solutions to meet our broadcast needs, so it was a logical choice for us to work with them. Thanks to its relationship with Hitachi, as well as its new in-house RF offering, Gearhouse Actis, we were able to reduce the number of vendors we had to deal with, which has simplified things from our perspective.”

The Asian Games is a multi-sport event held every four years, hosting 13,000 athletes and officials from 45 Asian nations and around 7,000 media professionals. The XVII Asiad ran from 19 September to 4 October.